Firstly, apologies for the lack of preview for last nights game but I've been a little busy over the past couple of days. Rest assured, it will be back for the Watford game and given last nights score could the 5-2 finally be on the cards?


So, we finally end our away day run of games without a win which stretches way back into last season and at least we made sure it wasn't a whole calendar year without a win.


I've not caught any highlights of the game as yet, catching most of it on the radio - and in particular I'll be looking forward to seeing Distin's goal. I read a little bit of the build up to the game from a Villa perspective and most accounts were wary of the threat of Vassell, which I discounted because he hasn't shown a great deal so far this season for one reason or another and he is currently the 'lucky' occupant of the left midfield role.


Still, it was inevitable I suppose that it was to be Vassell who gave us the lead and shock of all shocks we go and make it 2-0 through Joey Barton. Half-time away from home and 2-0 up - surely the game is as good as done. Well, not quite as we allowed Villa a foothold back into the game before Distin restored the situation to earn us the full three points.


Under Martin O'Neill Villa have surprised many this season - and their only previous defeat was away at Chelsea, but of late they have drawn games as opposed to have been winning so I felt we were in with a chance of getting something from the game, particularly with our good record at Villa Park.


Three points was perhaps a little more than expected but welcome nonetheless. 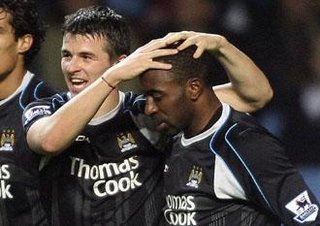 
"Obviously going back to your old club gives Darius
a bit of a lift, there is no doubt about that. I think he loves Villa. He had
great times at Villa but he enjoys coming back and putting on a show.
"He has
done that every time we have played them and credit to him. I am asking him to
play out of position on the left-hand side of midfield but the work he did
attacking and defensively was fantastic for the team.
"It isn't his best
position but there's not been one moment where he has turned around to me and
said 'I don't want to do this role'." Stuart Pearce on Darius Vassell.

"We were second best in the first half. We got
ourselves back in the game in the second period and at 2-1 I thought we might
force an equaliser but the third goal was crucial and they won comfortably in
the end.
"We did not play well enough in the first half. We are not famous
for coming out of the traps quickly. But I still see no reason for us not to be
competing at the start of the game.
"From our view point they scored some
very poor goals which was disappointing as we have not been giving many
away".


The Telegraph
The Independent
Fox Sports