Well, what can you say about that?

Both a result and performance which is making a serious bid as the latest candidate to be filed under several 'Worst ever' categories.

Looking at some of the press headlines this morning, they tell their own story:

'City players meet with chorus of disapproval after pummeling'

'Camara clicks for Wigan but poor City are losing the plot'

As a contest it was all but dead and buried after just three minutes with Richard Dunne being culpable for both goals. The first, with Dunne placing a poor pass straight into the path of Boyce who took advantage of poor positioning down the left from ourselves to cross for Heskey to apply what was in truth an excellent finish. 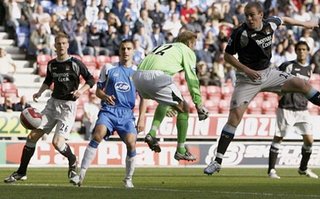 Before the expletives had begun to die down it was 2-0 when from a free-kick Richard Dunne perfectly glanced a header into the bottom corner straight past the on-rushing Weaver.

As a first-half performance it was one of the most inept I have seen in terms, with only a poorly directed header from an unmarked Corradi to speak of in terms of chances.

The second-half at least had a bright spell where we actually appeared to compete and arguably should have had a penalty for handball, and Vassell should have scored when nicely played through by the debutant Johnson.

But it was all to be too shortlived as Wigan added a third, again helped by some generous defending as Richards allowed his man to beat him but Stephen Jordan inexplicably failed to clear the ball, allowing Camara to nip in ahead of him to score. The fourth was not long in coming as poor anticipation again from the defence and the midfield allowing runners unchallenged saw Valencia to smash home and round off a miserable afternoon.

The chants of 'You're not fit to wear the shirt' rang out at the end, but is it solely the fault of the players?

There was a lack of application, movement, leadership, concentration and belief, with even the basics seemingly being beyond the players out there. There was also half a team missing - with several youngsters thrown into the side which seemed to disrupt the defence in particularly, but the side looked they had no direction from the management team.

The 4-5-1 formation clearly didn't work and the players didn't look comfortable with it. Samaras is not a left-sided midfielder and Wigan enjoyed plenty of success down the right, whilst Sinclair was ineffective without the support of Micah Richards behind him. The three central midfielders looked to be playing too close to one another for me which left Corradi increasingly isolated, and Barton should have been playing in a more attacking role.

The substitutions were also puzzling for me and whilst Pearce had to throw extra forwards on there didn't seem to be any defined structure to the formation with players appearing to be out of position and plenty of space for Wigan to exploit.

It is particularly frustrating as this was the first of a run of five games which on paper were 'winnable', and coming off the back of a thre game unbeaten run gave some hope for a bid to climb the table.

However, any 'progress' made over the past three games was well and truly blown away and the questions over Pearce's future at the club are once again being raised.