Finally I get a prediction correct.

Whilst not quite managing to put back to back Premiership victories together, I think that gaining a point at Goodison Park should leave most fans satisfied as we stemmed the flow of away defeats - doing so against a side who have started the season brightly.

One of the most pleasing aspects for Stuart Pearce must have been the fact that the equaliser came so late on, evidence that the team was willing to keep on battling and that they have definitely responded following the Chesterfield game. 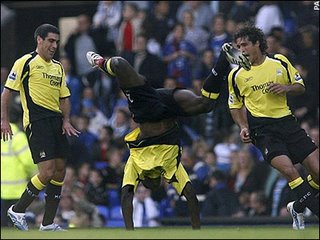 There was a change in tactics adopted by Pearce for this game with a 4-5-1 adopted, Corradi dropping to the bench in favour of Stephen Ireland, but Pearce was not overly convinced that the players fully carried out his system instructions. Possession wise Everton were well ahead over the ninety minutes and David Moyes was certainly disappointed that they had not added a second to kill the game off.

The game though was largely overshadowed by the Joey Barton incident following the final whistle - with all the match reports leading with it as their main headline. Whilst revealing his arse to the Everton fans was, in hindsight not the most advisable of moves I wouldn't necessarily describe it as a provocative or inflammatory gesture.

A thing I don't understand is what would make somebody actually go to the trouble of contacting the police to make an formal complaint about - don't people have better things to do? And what has rarely been mentioned in all of this is the level (and nature) of abuse handed out to Barton by the Everton fans. Perhaps Barton should make a complaint of his own?

Still, it must be the last thing Pearce would have wanted to focus on in the post-match interviews and he must be getting quite familiar with police procedures in recent weeks.

The Observer
The Telegraph
Everton Blog