Yesterday's goalless draw was a result that left both managers frustrated at the outcome, not to mention most of the observers who were there to witness a largely lifeless affair. 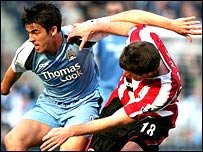 There were plusses for both sides as Sheffield United earned their first point away from home and City stretched their unbeaten run to three matches, are yet to concede on home turf and of course are also undefeated, but Stuart Pearce was not overly happy with the performance from the side:

"I don't think we showed enough creativity to win the game, even though we created a few chances we should have buried...If I am being honest United deserved a point because it was not vintage performance from us".

"In the first half too many people were waiting for something to happen rather than grabbing the game by the scruff of the neck and making it happen...in more offensive positions we have to be more aggressive with everything we are trying to achieve".

Whilst opposing manager Neil Warnock felt their first point away from home was deserved, he was frustrated that they didn't manage to go home with all three points:

"I'm slightly disappointed. I thought it was a game we could have won, it's a good feeling to think we're coming away with a nil-nil draw. It was a better performance today".

"I think we created the better opportunities to create better chances. We should have scored".

The Independent
The Telegraph
MEN
The Observer