Three points, a clean sheet and all is well in the world of City eh?!

As I said this week when the vultures were beginning to circle around Stuart Pearce after the Chesterfield debacle, it is ultimately a results based business and he needs to put some wins on the board.

And there was no better time to start than on Saturday. Admittedly, a West Ham side themselves lacking confidence and struggling to adjust (on and off the pitch) with the high profile signings of Mascherano and Tevez were not the sternest of tests, but hopefully beating them will put an end to the miserable run that effectively started when they dumped us out of the FA Cup last season. 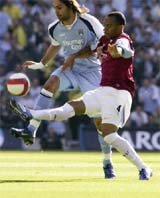 Team wise, I was glad that Corradi and Samaras were given another opportunity together and it paid dividends with Samaras scoring both of the goals. Of all the strikers on the books at the moment, Samaras for me is the one who is the 'purest' goal scorer that we have and Corradi could be a good foil for him, and suggests the decision to play him on the left at the start of the season was not a wise one.

Somewhat of a surprise though that Ishmael Miller got the start ahead of DaMarcus Beasley, and points to the fact either Pearce is not filled with confidence in him or he is not fully fit - which begs the question why did we pick him? For me Miller can be best described as 'raw' at this point of his career, but credit to him for his role in the opening goal - although he was a touch fortunate that his shot/cross made it's way to Samaras, who took both goals extremely well.

Pleasing that there was a clean sheet as well, and West Ham failed to get a shot on target during the whole ninety minutes and it extends our sound defensive run this season. Given our miserable away form in recent times, it demonstrates how impressive - not to mention important the home form (on the whole) has been.

Tougher tests no doubt loom on the horizon in recent weeks than yesterday, but it is important that this is now built on, with some confidence and momentum taken forward as recent history tells us this City side is not blessed with success in putting back to back performances together.

But confidence is a wonderful thing in sport, and we do have the players at the club who are capable of helping the side be a success in the Premier League.

They just need to start showing it on a consistent basis.