Thatcher suspended and fined by the club

Share All sharing options for: Thatcher suspended and fined by the club

The club announced today that they had fined Ben Thatcher six weeks wages and suspended him for six matches (two of which are to be suspended) for the 'challenge' on Pedro Mendes which brought universal condemnation on the player.

Thatcher still awaits an FA (and possible police) charge over the matter and has until September 12th to reply to their charge, which could result in a further fine and suspension handed down by themselves. 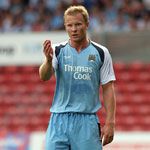 I certainly believe he will receive an additional fine by the FA, but I wonder if the clubs six game suspension is enough to ward off further punishment in that respect? Part of me thinks it may well do, but I do have a feeling that the FA will also like to be seen to be acting over this so may add an additional couple of games on top as with the part-suspended sentence, he will only miss four games - only one more than for violent conduct resulting in a straight red card.

After initially being critical of the clubs handling of the matter, I feel they at least deserve some credit for how they have subsequently dealt with it and for all the talk of sacking Thatcher, I believe that would have been an overly harsh sentence to hand down.

Interesting though that the club are believed to be unhappy at the FA for not taking further action over Michael Brown's challenge on Ryan Giggs - described as 'career threatening', and this is where you run the danger by allowing the FA to act on cases with 'exceptional circumstances' in that there are no guidelines currently in place to determine what is and isn't exceptional, which I intially commented on in the aftermath of the Portsmouth game.