Share All sharing options for: Thatcher banned by club, charged by FA

With the weight of public opinion growing against him, Ben Thatcher received a double blow yesterday as the club announced that it had suspended him following Stuart Pearce's review of the incident and the FA also announced that Thatcher is to be charged with 'serious foul play'. 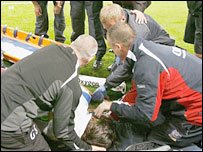 The FA are believed to be following the same rule that was used to charge Lee Bowyer following his on-pitch punch up with team-mate Kieron Dyer - despite having already been sent off in the game. Bowyer received a six match ban for his actions that day, so it is conceivable that Thatcher will be banned in excess of ten games due to the injuries sustained by Mendes.

The club also announced a suspension, possibly in a bid to stave off the growing furore around Thatcher but almost certainly as a result of critcism levelled at the club and Stuart Pearce for the non-committal stance since Wednesday. Pearce has since said that he has had chance to 'review' the incident again after initially not having had a clear view of it.

In a statement the club said:

'Manchester City can confirm that Ben Thatcher has been suspended from first team action pending the results of the club’s internal investigation into the incident involving Pedro Mendes during the game with Portsmouth on Wednesday.
The player will miss tomorrow’s home fixture with Arsenal. Ben Thatcher fully agrees with this decision'.

"What happened on Wednesday was indefensible. Any form of discipline will be discussed at board level, kept internal and we will move on from there.
But I can assure everybody that this has hit the player very hard. There's no bravado about him. He has gone home, turned on the TV and seen the challenge. The more you watch it, the worse it gets. His face was ashen when I spoke to him yesterday. He's disgusted with himself and there's no way I, or anyone at my club, can defend it.
People are having a go at him, but, in all honesty, he hasn't got a leg to stand on."

Thatcher could also still face further punishment as the police are still considering whether or not there is the evidence or a case to be able to lay criminal charges against him.