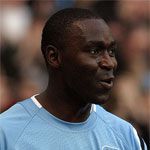 I initially dismissed reports of this earlier today as nothing more than a wishful attempt from Portsmouth, but checking the newsfeeds just now it seems there is substance to the story that they want to sign Andrew Cole, and perhaps more worryingly that Cole himself is keen on a move - so much so that the club have been moved to announce on the website that although they 'don't wish to lose Andrew at such a late stage in the transfer window, he expressed a desire to leave the club and join Portsmouth'.

The reason (above all) it suprised me was when he joined the club from Fulham, one of the main reasons was because it offered the opportunity to move back to his family in the North-West, so from a geographical perspective it makes no sense. He also did state that it would be his last move in football as well.

There is no immediate reason announced why Cole wants to leave, so early guesses are that whilst he has a one-year deal at City, Portsmouth are prepared to offer a longer deal - perhaps two or even three years, and he feels that he may have more of an opportunity to start with Pompey than at City.

It will be disappointing if he does go as his value to the side is apparant, and I believe last season our average goals scored with Cole in the side was around 1.5 per game, but without him fell substantially.

It seems that whilst Portsmouth have not been able to make a splash in the transfer market with true 'big names', they are able to entice players towards the end of their careers with the offer of a far lengthier deal than they will get anywhere else.