Another departure, but not Distin

Share All sharing options for: Another departure, but not Distin

Another one of the clubs younger players departed for pastures new today with Willo Flood making a £200,000 move to Championship side Cardiff. 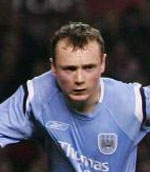 Flood follows Bradley Wright-Phillips and Lee Croft out of the door since the end of the season and in some ways is a disappointment in that three home grown players are no longer part of the set up.

I do however agree with the decision to release all three players as they have probably progressed past the 'promising' stage and should all have been commanding first team spots by now.

Tellingly, the fact that no Premiership sides (or even sides at the top of the Championship) have bid for them probably bears this out and I think it is good business by the club to rake in around £1.5 million in total for the three players, money which has certainly been put to good use with the recruits Pearce has made this off season.