Zidane name player of the tournament

Share All sharing options for: Zidane name player of the tournament 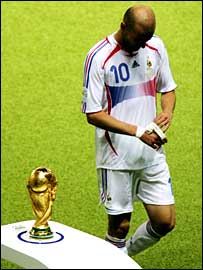 FIFA announced that Zinedine Zidane has been named as best player for the World Cup 2006 tournament.

Despite his sending off in last night's final, Zidane finished narrowly ahead in first place in the poll - voted for by journalists covering the tournament, ahead of Italian duo Fabio Cannavaro and Andrea Pirlo.

However, it does seem that the majority of votes were cast shortly after half-time and well before Zidane was sent off. It is inconceivable that had the vote been carried out after the game that Zidane would still have been named best player.

For me though, the fact that Zidane ended up being sent off should not have been a factor anyway.

The best player of the tournament should be precisely that. In the group stages, Zidane was poor and after missing the Togo match through suspension there were calls for him to be left out of the side. Although in the knock out stages he helped drag France to the final and showed some wonderful skills, but for me Fabio Cannavaro played at a high level throughout the tournament.

Shorn of his central partner Alessandro Nesta for most of the tournament, Cannavaro has managed to improve upon an already near flawless reputation. He came up against all manner of different strikers and handled them all, in no small part ensuring Italy conceded only two goals (an own goal and a penalty) throughout the entire tournament.

Whilst Zidane performed at a high level at the end of the tournament, for me he hasn't matched the level of consistency and performance that Cannavaro showed.

That to me is the simple reason that Fabio Cannavaro, and not Zinedine Zidane should have been named player of the tournament.