World Day 22 - Favourites out on penalties

Share All sharing options for: World Day 22 - Favourites out on penalties

Hosts Germany knocked out the favourites Argentina on penalties yesterday following a 1-1 draw after extra time.

They showed their clincial nature in the shoot-out, not looking close to missing whilst Jens Lehmann made a couple of crucial saves to send them and lead to scenes at the end with the sides clashing and red cards being shown.

The game itself perhaps didn't live up to the potential I thought that it would as an attacking spectacle. Argentina dominated possession in the first half but couldn't convert that possession into genuine chances, but shortly after the break went in front with a powerful header from Ayala.

Similarly to Spain's substitutions, Argentina may be rueing their tactical decisions with the more defensive Cambiasso and Cruz replacing Riquelme and Crespo in a bid to hold on to their lead. It was to their cost though as Germany equalised with ten minutes left through Borowski, which all but guaranteed the prospect of extra time. 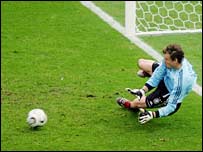 Extra time was not a classic and it was one of the situations where as time wore on, it became apparant both sides were content to go for penalties as opposed to taking a risk to try and snatch the game in extra time - which proved fateful for Argentina.

So, the favourites are out but no less a dangerous side has gone through. The Germans - whilst not putting their best performance in, will take a great deal of momentum from this game and is some way beneficial for the tournament as as a spectacle the mood is higher as long as the hosts remain in.

The backing of a home crowd can't be underestimated (check back to any major tournament) and they are now just the one game from another World Cup final.

Don't bet against them making it.


Prediction: Incorrect - I tipped Argentina to go through 2-1 in extra time.