France were the final side to make it through to the last four with a much deserved win over Brazil yesterday evening.

Proving that their second half showing against Spain was not a flash in the pan, they thoroughly deserved their victory and looked a dangerous side going forward, opening up Brazil time and again.

The goal itself was a shocking one to concede, with a striker of Henry's class not even remotely marked and allowed to slot home at the far post. As the ball was swung in by Zidane there were five French players attacking the ball with only three Brazilians in defensive positions, with six of the Brazil side stationary on the edge of the box showing no interest in defending the ball.

Ultimately it has been a poor tournament for Brazil. They have never really looked convincing in any game and their attacking threat hasn't been shown apart from the odd glimpse. Ronaldinho in particular was supposed to light up the tournament but fell below the standards he has set whilst Ronaldo and Adriano looked distant and disinterested up front.

Ronaldo did at least try to spark some life into the side last night, trying to run from deep but without the pace of his past days did so without much conviction. The 'big guns' failed to deliver when it mattered and this is the reason why they are flying home earlier than most anticipated. 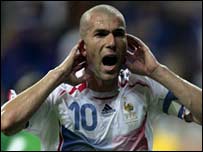 Contrast this with France who now look to be the favourites. At the stage of the tournament when it counts, their old guard (written off by many) have stepped up. Vieira and Zidane in particular look different players than they did in the group stages. Vieira seemed to have the energy of his days at Arsenal whilst Zidane left the pundits fawning over his skills as he controlled things last night.

Even the spirit in the French squad looks to be harmonious and without the sense of division that was said to exist. They look galvanised and in good shape for the semi-final against an unconvincing Portugual side and justifiably they have now been installed as 7/4 favourites to win the tournament.