The late game last night didn't have the drama of the earlier game, with Italy having one foot in the semi finals after just six minutes when Gianluca Zambrotta surged forward to strike home from long range.

The remainder of the first-half was a fairly uninspiring spectacle with Ukraine not willing to push themselves into the game (much to the chargrin of Martin O'Neill and the rest of the BBC panel) and Italy content to comfortably hold the 1-0 lead.

It came to life early in the second half when Ukraine - perhaps realising they were on the verge of crashing out, pressed forward in numbers and had a spell where they were unlucky to not get back on level terms.

Buffon turned a header round the post, then made a great save from short range and Zambrotta managed to use his body to deflect the ball away. From this though the Italians broke away and killed the game when Luca Toni opened his tournament account. 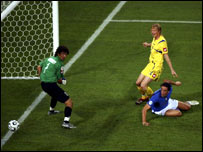 This deflated Ukraine and Italy then began to show some of the attacking class they are capable of - with Totti coming more into the game, and Toni added his second late on to seal a 3-0 win.

Tactically I think Lippi has hit on his best formation with Camoranesi added to the midfield with Totti playing off Luca Toni. They looked at their best going forward, whilst the play of Cannavaro and Buffon at the back has been near flawless.

It does now set up an intriguing semi final clash with Germany with what are two sides who match up fairly evenly in terms of tactical approach and team make-up. Both sides are now coming into form and have plenty of tournament history to spice it up.


Prediciton: Correct result as I went with Italy 1-0.