The final whistle has just gone in this game, a match-up which threw off the stereotype of the dour opening game of a World Cup tournament.

After going 3-1 ahead, you would have expected the Germans to have killed the game and saved themselves for bigger battles ahead but Wanchope's second of the game led to a nervy last quarter of an hour.

Germany certainly looked impressive going forward, with Schweinsteiger and Podolski the creative forces behind Miroslav Klose (22/1 to be top goalscorer incidentally) enjoying acres of space to attack a Costa Rican defence reluctant to push forward to counter them. 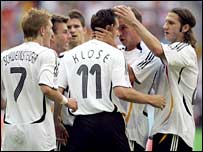 I fully expected the Germans to cruise home after going ahead so earlier in the contest through a fantastic strike from Philip Lahm who staked a claim for goal of the tournament already.

From the midfield onwards I thought Germany were in command for the majority of the game and appeared to overrun the Costa Ricans. They also had long spells of domination in a game where Costa Rica's attacking stance was to aim long for Wanchope - and it worked to some degree as both goals were coolly slotted home by the former City striker.

So, Germany take the points and for the majority of the game I was impressed with Germany as time and again they went forward with purpose and opened up Costa Rica on several occasions. But, two shots from Costa Rica yielded two goals and despite Wanchope's impressive finishes neither time could you say the Germans defended too well and how will they handle more impressive attacking sides further down the line?

A good opening game nonetheless though and hopefully a marker has been laid down for the rest of the tournament - certainly I'm not expecting Poland v Ecuador game later on to match it.