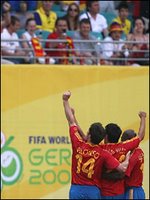 The early game today saw Spain defeat Ukraine 4-0 in what was commented as the most impressive performance of the tournament so far. I'll be looking forward to catching the highlights to see how true this is but the Ukraine are certainly no mugs (as their qualification record showed) and the result sees another of the big seeds in pole position to qualify after just one game - a feature that has been consistent throughout the tournament so far.

I decided to stay a little later at work today, aware that a few 4.30 finishes have been made since the tournament started and didn't anticipate Tunisia v Saudi Arabia to be too hot a game. Luckily I managed to get home for the last twenty minutes or so to catch the last three goals, including the injury time equaliser from Jaidi - making the commentators day by being able to slip in every reference possible to Bolton thereafter.

Ukraine would have breathed a huge sigh of relief following this result as if thy can put the Spanish game behind them they still appear favourites to go through behind the Spanish in this group.