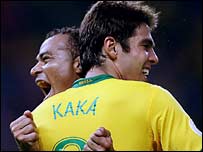 Brazil squeezed past Croatia 1-0 this evening but it was a game the impressive Croats could have taken a point from, which would have been just reward for the effort and performance they put in and in the end were only beaten by a moment of class from Kaka.

Brazil were rarely offered any space to play and create from by Croatia who stuck to their gameplan well and out of the 'stars' only Kaka and Ronaldinho offered anything in the way of creative output but were not helped from an inept performance from front men Ronaldo and Adriano - Ronaldo in particular coming under fire from the BBC pundits.

In fact Croatia had several chances themselves with Rangers' Dado Prso looking strong and lively in attack, and although Dida was tested, he was upto the task on each occasion.

Although they startd with three points against their most serious rivals, and they are hindered by the fact everyone knows they can set such high standards, it is very much a case of can (and must) do better.

I didn't catch any of the early action today apart from the goals following the Brazil-Croatia game but the early game today featured three great goals, particular the come from behind goals from South Korea, from Ahn and Chun-Soo Lee setting them up well following the first round of games. 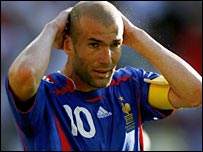 France got off to a stuttering start in what I was informed was the poorest game of the tournament so far with the 4-5-1 or 4-4-1-1 formation not clicking and leaving Thierry Henry isolated in attack, with Zidane and Vieira turning in unimpressive performances. It looked that Switzerland had a couple of good chances to take all three points, something that would have left the 1998 Champions in a big hole.

Tomorrow afternoons games round out the first round of matches and we move into the second set with Germany v Poland tomorrow evening, a round of games that prove critical for qualification - will this see a change in the open approach seen over the first week?