Italy passed what looked would be a sterner test against Ghana this evening with a 2-0 victory.

I thought that Lippi got the team selection spot on in midfield, preferring Perrotta over Camoranesi to flank Pirlo alongside Daniele de Rossi. 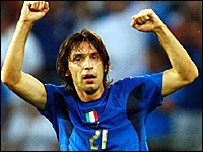 This midfield trio enjoyed success throughout the first half, creating several chances from what on paper is probably Italy's weakest area. Toni saw a great effort come crashing back off the bar before Pirlo added to the tournaments list of long range strikes to put Italy ahead at the half.

Ghana could consider themselves unfortunate to not be awarded one of two decent penalty shouts - a 'cleverer' forward may have been awarded the second one in particular, but Italy on the whole controlled the second half and Ghana offered little apart from what was created through Michael Essien - who had a dominant game in midfield but lacked any real offensive support.

A little more composure up front could have seen them rewarded with a little more success than they actually got - and it is in attack where some of the teams in the tournament have come up a little short as they don't quite have the quality to finish off moves.

Italy wrapped up the game later in the half when Iaquinta pounced on Kuffour's errant backpass to put themselves level at the top of the group with the Czech Republic and stay on course for an important final matchup to avoid Brazil in round two.