Thanks to winning the toss, we batted first yesterday giving most of the team a chance to catch the England game.

For the first time this season I managed to put a bit of an innings together which meant that I missed the first half of the game - which by all accounts was far better than the second half which I saw.

It appeared to be a typical tournament performance by England where they go a goal ahead in the first half, and then after half time sit back allowing the opposition to push on. The main problem with this is that England don't appear capable of holding onto the ball and controlling the game. Time and time again there was no link between midfield and attack and it resulted in hopeful balls being aimed at Crouch, a tactic which didn't work and quickly gave possession back to Paraguay. 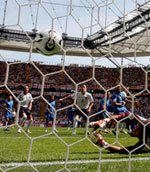 The substitution of Owen for 'tactical' reasons was a strange one and for all the faith Eriksson says he has in Walcott, to not use him was baffling as it left Joe Cole playing in a role which doesn't play to his strengths. Stewart Downing wasn't convincing on the left when he came on and far more attacking output will come from Cole in that position.

For all the possession and territory England conceded, Paraguay rarely caused problems and from memory Robinson was only tested once.

The concern will be when England come up against a side with far more attacking quality as historically that is when they tend to crash out of tournaments as they are always likely to concede opportunities.

It was a win though, and with the surprise goalless draw between Sweden and Trinidad & Tobago it leaves England in pole position now to top the group.