Share All sharing options for: World Cup Day 17 - England through to quarter-finals 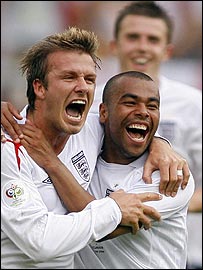 England progressed through to the quarter-finals earlier today with a 1-0 win over Ecuador.

England altered their tactics as expected to 4-5-1 to accomodate the inclusion of Michael Carrick, with Owen Hargreaves replacing Jamie Carragher.

It was not the performance that was hoped for against a side who threatened very little apart from when profiting from Englands mistakes and it took a free-kick from David Beckham to win the match.

The 4-5-1 didn't really work overall today but I think a large part of that was done to the ineffective play from Lampard and Gerrard in support of Rooney. Rooney worked hard in the lone striker role but it is a role which doesn't suit his strengths and he needs someone either alongside him or in front of him to bring out his quality.

The midfield again was a worry. Lampard and Gerrard seem unable to display their club form in an England shirt, with their passing in particular a major concern which led to the breakdown of attacks time and time again. Joe Cole had perhaps his poorest game today and apart from the goal Beckham offered virtually nothing, with his fitness maybe a concern for future games.
Carrick played well in the 'quarterback' role and was a good outlet for the side, but his effectiveness will be reliant on the rest of the side and what they do with the ball.

The defence improved from the previous game and I was impressed again with Hargreaves, who played well at right back. Ashley Cole's block early in the first stopped a certain goal and Terry and Ferdinand looked a little more composed together at the back.

In goal though, Robinson continues to appear nervous and hesitant and doesn't display any confidence to me. I find it surprising that the media has not made more of his performances so far and (without blue tinted glasses here) feel that if James had turned in similar performances he would have been targeted.

A win, but once again concerns for the side as they go forward. It is now where the tournament really kicks in and there will not be any sides who will be as weak as Ecuador.

Can England step up when it counts?