Group H didn't have an awful lot riding on it heading into the last fixtures with only Tunisia having an outside chance of ousting Ukraine into second spot. It was not to be though as Ukraine won 1-0 with a penalty through Andriy Shevchenko to put them through whilst Spain confirmed themselves as group winners, also winning 1-0 themselves over Saudi Arabia. 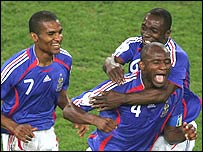 Group G however had plenty of interest with 1998 winners France facing the prospect of another early elimination. Needing possibly a 2-0 win to go through they struggled in the first half, looking edgy in front of goal despite some nice build up play and dominating territory and possession. The second half started in similar vein but two goals in a five minute spell from Patrick Viera and Thierry Henry guaranteed them through from this group.

They go through in second place though thanks to Switzerland winning 2-0 over South Korea, earning themselves their first group winners spot in a World Cup tournament. Goals from Senderos and Frei saw them set up a last sixteen match-up with Ukraine.

The French now face Spain in the last sixteen with opinion divided over whether they are a spent force or ready to peak at exactly the right time. Zidane is expected back in the line-up which may not have too positive an effect on the team (and Henry in particular) and I cannot see beyond Spain to go through.

Refeering decisions have dominated the headlines over the past day, but it was a great decision for the second goal tonight to overrule the linesman flagging for an offside decision. Replays showed the ball was played through by the leg of a South Korean defender, and despite their protests the decision to play on didn't give Frei any advantage in being able to slot home.

Credit where credit is due.