Share All sharing options for: World Cup Day 14 - Day of the underdogs

Australia turned in an impressive performance tonight to twice come from a goal down to earn a 2-2 draw in their showdown against Croatia. 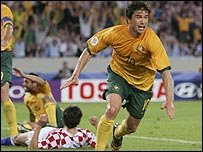 The Croatians got off to a flyer with a free-kick from Srna barely a minute in that flew past Kalac in the Aussie goal. Credit to the Aussies though who fought back well and had the majority of possession and opportunities throughout the first half and were rewarded just before the half when Craig Moore slotted home from the spot.

Croatia regained the lead through Kovac when Kalac made a hash of his shot and not justifying Hiddink's decision to replace Shwarzer. It was the Aussies who came out on top though when Kewell - who played well after a slow start, netted the equaliser to put ensure Australia took second spot over Croatia, who finished the night with nine men following two late sendings off.

Australia now move on to face Italy who did enough to come out on top against the Czech Republic by a 2-0 margin to leave the Czechs flying home with two defeats following their superb start against the USA. Looking ahead a little, the Italians could be fancying their chances of progressing with a last sixteen match-up against the Aussies then a potential quarter final tie against the winner of Group H - which may well be Switzerland or South Korea.

The USA lost out in their battle against Ghana, getting back into the game after Ghana took a lead following Claudio Reyna's error. Ghana regaining the lead following a harsh penalty decision when the marvellously named Pimpong was adjudged to have been fouled. Ghana took second place in the group, winning their final two games and now fly the fag for the African continent in the knockout stages with a dream tie against Brazil.

Brazil came out on top 4-1 over Japan after going a goal down in the first half. Ronaldo, looking very out of shape from what I saw, equalled Gerd Muller's World Cup goals record of 14 with a pair of goals and will surely take the record sometime during the tournament.