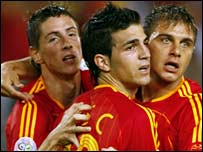 Caught a little bit of the Spain game earlier this evening, and seeing them dominate and score both goals made me wonder what the hell had happened for the previous sixty minutes of this game. Torres again proved he is one of the hottest prospects around and should graduate to the 'elite' level over the next few seasons.

The comeback did spoil a potentially interesting final round of games in this group as Ukraine should pretty much be favourites to take second placed after recovering from their beating against Spain to hammer Saudi Arabia 4-0, now needing just a point against Tunisia to go through.

Earlier in Group G, Switzerland moved atop of the group on goal difference with a 2-0 win over Togo to set up a crucial final last game against South Korea. Despite being in third place, France need just a 2-0 win over Togo in their final game to qualify so a 'winner takes all' battle looms.