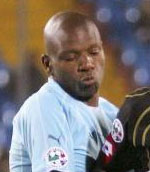 Seems that despite both the club and player being keen on each other, the proposed signing of Ousmane Dabo appears dead in the water.

According to Dabo's agent - a certain Willie McKay;

"We are speaking to three clubs apart from City and Bolton, Ousmane is one of the best Bosman signings available in Europe this summer and he has expressed his intention to play in The Premiership.
He did admit he fancied playing at City, but now we are looking at other options and hopefully something will be sorted out in the next couple of weeks or so."

Dabo appeared keen on the club, so could it be solely down to money? Surely the club must have known of his wage demands when he rebuffed the contract offer from Lazio so it is a little strange that negotiations would breakdown over money.

According to McKay he is now set for negotiations with other clubs, yet call me a cynic but I can't help thinking it may be part of a negotiation tactic on the part of Dabo (and McKay) to up the wage offer from the club.