The final home game of the season ended with an unsurprising end result but left fans frustrated as the side continued the shocking run of results that has led to most people counting down the days until the end of the season and thankful there is a World Cup to take the focus off a horrible last couple of months.

Arsenal fielded pretty much a full strength line-up which saw Ashley Cole make his first team comeback and only Fabregas and possibly Pires and Reyes who will start in the Champions League final.

Following the game, Pearce alluded to a 'lack of belief' which he believes cost us from taking anything from the game. As much as a lack of belief, I thought there was a lack of energy - particularly from the midfield. The teams who have had success against Arsenal in recent times have been those who have got in their face and hustled them out of ther stride. There were too many times when our midfield and defence stood off them which allowed them too much space to cause damage - as was the case for their first goal when Henry had space to play Ljunberg through to score what was his first Premiership goal of the season (although I personally thought Ljunberg was in an offside position).

To our credit, I thought we showed some fight in getting back into the game with a goal through David Sommeil - albeit a scrambled effort following a corner. However, we again failed to create any real clear cut chances with Samaras and Vassell not making the best of rare opportunities that were created.

Defensively I thought we were fairly sound, with Sommeil looking effective at right back (is Danny Mills now fifth choice?) and Richards again impressing. The concern (as it has been for some time) is in midfield and up front where Samaras and Vassell looks poles apart from each other in terms of wavelength and link-up play. It is midfield where the biggest worry lies though. Out wide Sinclair and Riera (who I am a fan of) were ineffective wheras Reyna and Barton hardly created a thing all night.

Barton looks a shadow of the player he was over the first half of the season in terms of quality and commitment and all signs are appearing to lead to his exit over the summer. Whatever your opinion of him and his actions from January onwards it cannot be denied that the level of play he brought has been sorely missed. 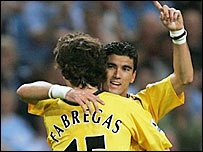 Once Arsenal got their noses back in front there was no way we were getting a foot back in the game and it was a great and both goals were neat finishes from substitute Reyes. The comparative benches illustrate greatly the difference between the sides and compare Reyes's influence on the game to that of Willo Flood.

As good as the likes of Jordan, Richards and Onouha have been when they have stepped in we could do with Steven Ireland really kicking on over the next season to add some much needed creativity to the side. One thing we are sorely lacking is someone to 'pull the strings' in the way that SWP, Bernarbia, Berkovic and Kinkladze have done in recent times.

"I feel it was a spirited performance from Man City and they made it very difficult for us. We needed to dig deep to win the game but I always felt that we were ready to fight until the last minute to make the difference. But at 1-1, the game could have gone maybe both sides because Man City had one or two good chances as well and we needed the fresh players that came on. Maybe Reyes came on and made the difference but we had a few chances before as well." - Arsene Wenger.

I thought we stuck to our task quite well," our corners, set plays and crosses flashed in quite well and we looked like scoring goals."I thought we afforded Arsenal a touch too much respect when they got nearer our goal. In that last 30 metres we should have got in their faces a bit more." - Stuart Pearce.