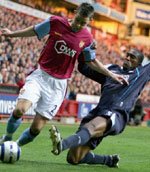 At last! A win. Not just a win, but a win on our travels!

As teams on a hopeless run of form must welcome our arrival, if there was a ground to travel to and end our miserable run then Villa Park surely ranks at the top of the list.

A result that could have easily ended in a draw thanks to a late disallowed Villa goal but Stuart Pearce was in mood for charity after the game; "It happens in football...we lost out on two goals last week and gained one tonight".

It was Villa old boy Darius Vassell who settled the contest, improving on the finishing he displayed in the FA Cup tie earlier in the season and backing up my 'due a big game' predicition in The Observer on Sunday.

Sandwiched in between the two Champions League games and without anything meaningful at stake it must rank as one of the lesser focused Premiership contests of the season and I doubt that the three points have really stirred the masses from their recent apathy. 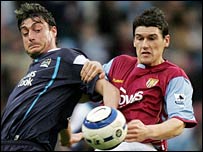 I'll leave the final word on the victory to Stuart Pearce though;

"It's not the end of a losing run, but the start of winning
one".