Despite last weeks public shellacking by Stuart Pearce, there can't have been too many Blues who approached yesterday's game with much confidence or optimism.

Facing a Tottenham side looking to rebound from the previous weeks setback to their Champions League hopes, we were coming off a four game Premiership losing streak and away form which would shame Sunderland.

As Guy summed up quite well in The Observer; 'I thought there was more chance of Red Rum winning the National than City getting three points'. 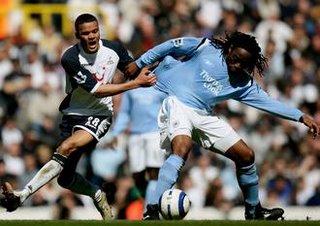 Pearce chopped the midfield around, with only Sinclair remaining from the horror show of last week but without the form of James it could (and should) have been more but credit is perhaps due to the side for battling away and actually getting a foothold back into the game when most must have considered heading for the exits.

Whilst we were on our impressive streak at home, it seemed to paper over the cracks of the loss of form on our travels and at least led to some confidence in the side. It seems that all hope of any positive finish to the season has now evaporated and we are trying to take positives such as a 'spirited display' and 'improvement on last week' from the game as opposed to any tangible pluses.

Our recent woes have also led to the first rumblings about Pearce's management with one post match phone-in call stating he was the worst manager we've had since Frank Clark.

I certainly don't subscribe to that theory and I think Pearce posseses the qualities and skills to take us forward, but his honeymoon period has now long gone and this is the first time he has been tested and needs to provide answers to the questions being posed as there is no doubt that the on field problems are leading to a degree of off field disillusionment (as is the theme throughout the latest issue of City 'Til I Cry at the moment.

If the remaining five games go the same way of the last five games then perhaps everyone will be glad of the distraction of The World Cup.


Did David James's performance help his player of the year hopes? Click HERE to vote.