Not standing For It ?

Share All sharing options for: Not standing For It ? 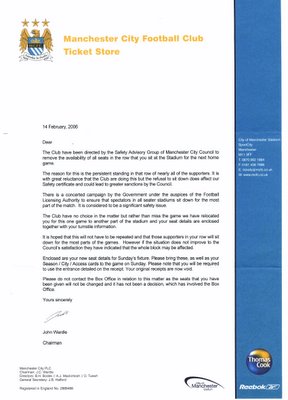 Different rows have been closed for this game, though im unsure if this is on top of the
rows closed for the last game or different ones this time round ?

The recipient of this particluar letter has demanded a refund , based on the fact he has
been dispatched to the third tier away from the people he normally sits with. Whilst the
letter makes it clear the clubs hands are tied on this , are they seriously taking enough
action to protect the fans not breaking rules ?

It would appear that this issue is set to run and run , the irony of the situation is that as
the council reduce the crowd they reduce there own revenue !

The opinions on this matter vary hugely as we saw from the comments on the last
article regarding this issue , time to put it to the vote.