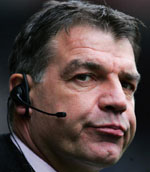 It appears the England manager situation is gathering pace with both Curbishley and Allardyce having informal chats with the FA , whilst Pearce takes the 'no reply' stance on his position having agreed to sign a contract later this week that apparently gives him the option to leave if either England or A bigger club come in for him.

It appears the FA have decided it will be between the two interviewed men as all talk of O'Neill and Hiddink has quitened.

So who's it to be ? In the absence , or maybe David Deins interference , of an approach for Arsene Wenger who I would love to see manage England. And somewhat suprisingly given the kudos associated with the England job on the continent no other 'big' names in the frame, who would you go for between Curbishley and Allardyce ?

Has to be Allardyce for me , Bolton have been transformed from a good Championship side into genuine and regular European place contenders , if you subscribe to to the mini league theory (Title contenders , European contenders , Safe , Relegation Fighters) Bolton have gone up four places over a couple of years ! And notably without any significant investment.
Allardyce is also willing to try new Techniques and Technologies despite his love of the wing commanders theory of getting the ball into the box ASAP. Before the howls of derision from Bolton fans start you do play long ball / direct football , its worked brilliantly for you admit it and enjoy it. Fat Sam would also snap the FA's hand off if offered the job , Im sure he has a lot of affection for Bolton but every time I have seen him interviewed recently he seems to throw his hat in the ring for any job in which his name is muted , presumably he feels he has taken Bolton as far as he can.

The press also seem to have him , quite rightly after his achievements , as flavour of the month. You do wonder how they would react though after a couple of poor England results , Turnip Taylor all over again ? The style of play would also come under the microscope and would test Allardyce's management credentials , sure Bolton play some cracking football at times but there first priority is hard work and knock it too Kevin Davies , could he coach another way ?

Just my opinion as always ! Allardyce has earned the chance , you just wonder how long the press would give him. Now who's going to take long throws for England ........