Into the quarter finals then for the first time in thirteen years and the catasrophe that was the 5-2 home defeat by Tottenham. Perhaps it is that memory that is resulting in a tentative approach to the possibility of FA Cup glory, despite the possibility now being a very real one. 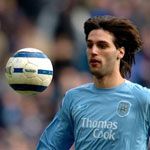 I expected last nights game to be a cagey, cautious affair as both sides seasons hopes in effect rested on the result. It was City though that started the brighter side and it was pleasing to see Riera restored out on the left. The ever improving Samaras carved a great opportunity out for himself early on but his final shot did not do his early work justice. He also failed to convert another half chance before he deservedly gave City the lead, hitting home the rebound after Sorensen had saved his initial shot brought about by good play out wide.

Villa were lacklustre, even more so after the threat of Baros ended due to injury and we should have gone in at half time three goals up, and Sinclair's miss when one on one would surely have sealed the game. As it was, David O'Leary must have been cursing when minutes into the second half Villa conceded a soft goalas old boy Darius Vassell was allowed to re-direct a shot from Riera to put City 2-0 up.

You never felt that Villa had it in them to mount a comeback of any sorts and City remained in control for the rest of the game allowing only half chances as the impressive Dunne and Richards allowed nothing past. City managed to make things hard though by allowing a Villa goal with five minutes left but despite an attempted assault from them, James was never tested again and the whistle went to usher us through to the quarter-finals. 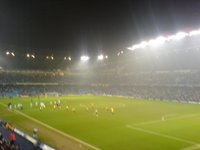 On the night, Samaras impressed me a great deal and his all round play is good and Riera seems to bring the best out of him linking up on the left and it was a good move from Pearce to restore the Spaniard to the side, which also allowed Musampa to slot back alongside Barton and turn in one of his most solid displays. Micah Richards again in the centre in relief of Distin showed a maturity beyond his years and I think there will be no shifting him from the squad given his performances over the last month.