Taken from ecotricity.co.uk - after piped music, is this the clubs latest attempt to generate more atmosphere at the stadium? 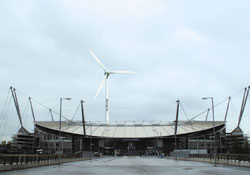 The Sportcity Wind Turbine project is a global first in sporting history, and will single out the City of Manchester stadium as the only sporting arena in the world to have its own green energy supply. The turbine will also be used to supply energy to the homes of people in East Manchester.

We now seem to have found a definitive site for the turbine, which has
been a major headache considering the stadium is based in an urban environment.
With the local council backing the scheme we are hopeful of a successful
application. To find out more on the application and how you can voice your
opinion then go to our online exhibition page.

Ecotricity is passionate about averting climate change through building
unobtrusive and attractive turbines, and the Manchester City turbine has been
designed by internationally celebrated architect Sir Norman Foster.


Manchester City's chief executive, Alistair Mackintosh, said:"At a time when the subjects of climate change and carbon emissions are dominating the headlines and the thoughts of the world's most powerful leaders, I am proud that Manchester City is playing a significant part in safeguarding our environment.

"The carbon emission savings from the SportCity turbine would be equivalent to that of nearly 2,000 homes and would really make strides into the long-term goal of making Manchester a truly green city."