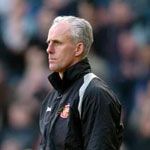 We must be becoming the team under-fire managers fear facing after Mick McCarthy followed Graeme Souness by being sacked following a defeat at our hands. It is testament to how the team have stuck by McCarthy that there is widespread condemnation of his sacking from players and fans alike. Wheras it was clear that Souness had 'lost' the dressing room, Sunderland were committed to the cause and never gave up on the game (something which is a theme throughout the season). Ultimately, they aren't good enough and McCarthy's assumption a few weeks ago that the board had budgeted for relegation doesn't appear to wide of the mark.

It was a game though that we were expected to win, and did so, although not without almost throwing away three points which continued our fine home run of late.

For one reason or another, I didn't manage to set off to the game until after 1pm - musing that we would probably be 'two up by the time I get there'. Arriving at the ground about 1.50 to be kindly informed from a badge seller outside that we were 'two up, Samaras got them both'. 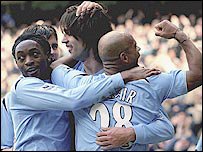 Reflecting on the game as a whole afterwards, it was clear that I'd missed the best twenty minutes of the game and going two clear so early and comprehensively probably had a part in how we approached the rest of the game. Although the midfield saw plenty of the ball and plenty of space to operate in, we were guilty of sloppy and careless play, at times appearing almost lazy as though the team had thought the game was clearly in the bag. It was a poor goal that we conceded, with Stephen Jordan poorly positioned in being outjumped by Breen who headed back for Kyle to score his first Premiership goal.

The goal didn't really jolt us from our malaise either as our touch and link up play was not good enough and it is possible a more able side than Sunderland might have punished us, and indeed they wasted a couple of good chances as they pressed further towards the end of the game before Garry Breen was sent off for comically 'controlling' a throw-out from James with his hands to set up an attack. The sending off was probably a fitting moment to sum up the haplessness of Sunderland's season.

Apart from his goals, I thought Georgios Samaras played his best game so far - looking sprightly, keen for the ball and linking in the impressive Riera and Sinclair several times. Clearly he had read my bit in The Observer that he was due a big game.

Again, I have to question Pearce's substitutions though. I can only assume Riera was injured to be taken off but to be replaced with Sun Jihai was puzzling when either Croft or Ireland would have been a better option and that Vassell lasted as long as he did was a mystery to me as he looks equally short on both fitness and confidence - his touch and composure in front of goal deserting him.

But all in all another three points and we move to Portsmouth next week to face a team fast running out of time and without a goal and win in some time. What better opposition for them to face then.

Other reports:
The Independent
The Mirror (check the appalling headline out)
OneSunderland.com