The actual result from yesterday has been somewhat overshadowed by the Drogba handball and Distin sending-off, with much of the MOTD analysis and press coverage this morning concentrating on the two incidents, with the Drogba one inevitably attracting most of the attention - primarily because of his post-match comments.

Looking at the Drogba hand-ball first - much has been made about his comments that he 'cheats' and 'dives'. There is no doubt that he has been guilty of diving (or simulation) during his time at Chelsea, but if I can play devils advocate for a moment I wouldn't class his hand-ball necessarily as cheating. As Lee Dixon commented, it wasn't as if Drogba jumped up and punched the ball in the net. The ball came across him and as he attempted to control it the ball struck his arm and unfortunately for us fell perfectly for him to slot home for his and Chelsea's second goal. Clearly he wasn't going to hold his hand up (sorry, wrong choice of phrase perhaps) and have the goal chalked off. It was however nothing to do with diving or cheating.

The people at fault in this situation were the referee and linesman - particularly the linesman who was right in line with Drogba and should have clealy seen it, and disallowed the goal. 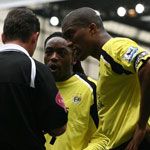 Which leads on nicely to incident number two - Distin's sending off. In the aftermath of Drogba's second goal, Distin and Kiki Musampa were booked for dissent (ie. protesting the validity of the goal). At half-time, Distin was in possession of the ball when the referee blew and Distin went over to speak to him. It was hardly a conversation the two had - Distin presumably asking "Why did you allow the goal?", whilst Rob Styles kept repeating "Give me the ball". Possibly sensing the only way to end it was to yellow card him, Styles did precisely that and Distin got his marching orders. It was all unnecessary as when he did produce the yellow card it appeared that Distin had begun to move away, obviously realising he was not going to get a satisfactory response.

This again is another topical issue as much has been written recently regarding the intimidating and influencing of referees to make decisions. One suggestion that has been made is to allow only the captain to speak to the referee - precisely what Distin was doing. If Rob Styles had given an answer to what Distin was asking instead of just repeating "Give me the ball", I am certain Distin would have walked away and we would have remained with eleven men for the second half.

Not that it appeared it would have made much difference though.

Stuart Pearce, mindful of the lack of options available to him altered his normal tactical approach and opted for a 5-1-3-1-1 line-up, with the intention of providing extra protection to counter Chelsea's attacking threat. From the highlights it didn't appear that are midfield trio of Musampa, Ireland and Flood could get any sort of hold on the game which left the defence exposed time and time again and Chelsea could have had two or three more gols - Gudjohnsen, Drogba and Crespo wasting clear chances.

It says a lot for our lack of creativity that our two best efforts were both from Danny Mills - along range effort which would matched his Everton one if it had gone in, and a decent attempt from a free-kick.

A lot has been made following the West Ham defeat that we should now play some of the younger players from now to the end of the season to give them experience as we are now just playing out the season. The problem Pearce faces is that around the mid-table positions it is quite congested and with around £500,000 on offer per place in The Premiership he cannot afford to simply throw away points as a higher Premiership finish could provide more flexibility to Pearce in the transfer window over the summer.

Players have been blooded this season already though with Onouha, Richards and Ireland getting extended runs and Croft, Wright-Phillips and Miller also featuring. Given the injury problems we currently face in addition to one or two suspensions it is highly likely that some of the younger players will see extended action between now and the end of the season - whether Pearce intended it or not.