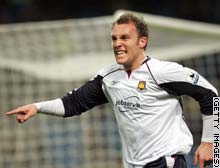 Unfortunately there isn't another 48hrs , and as a result the 2005/6 season effectively ended on Monday night On Friday night we still had high hopes of extending our superb home form and t aking a step closer to Europe with a win over Wigan and expectancy was also High regarding the FA Cup QF versus West Ham.

The Wigan game saw nine changes from the team that saw off Villa to secure our first QF since the days of Peter Reid . One was the return of Sylvain Distin , the two to keep their place James and Sinclair. Despite a bright start the cutting edge never appeared to threaten Wigan with BWP gaining a rare start and failing to impress and Darius looking like he needs the hernia op he is scheduled for sooner rather than later. Wigan without ever excelling forced there way into the game and always the more likely in a game devoid of any quality , bar Lee McCullough's header after Sommeil and James had both sliced the ball to give Wigan the corner , when it should have been hoofed down the other end of the pitch. Presumably James didn't think it was as funny as he originally thought when McCullough powered the ball past him with a superb back post header. Samaras had made a brief appearance as sub before been subbed with an injury that was going to haunt us. Sinclair should have leveled it up but again fluffed a one on one with the keeper , maybe he had been watching a collection of Anelkas and copied the style.

Still at this point most blues were not too despondent , the first team was due back versus West Ham and the optimism that unjustly flows through city fans was begining to bubble.
So where did it all go wrong ? Tricky Trev and more notably Samaras has picked up injuries in the Wigan game so it didn't bode well from before kick off. Again City started brightly in a cracking FA cup atmosphere (credit to West Ham for shifting 5/6 thousand for a monday night TV game and in 4 days as well)
The Hammers had there fair share of first half possession but rarely threatened with city allowing them to move it along the back four and into non Threatening areas and looking pretty solid at the back. Up front however the lack of quality was apparent despite a number of balls going into the box , there wasn't that much quality and West Ham also looked pretty comfortable at the back. However Dean Ashton , a failed target for City twice , looks like every inch of the 7 million the Hammers board invested in him when City balked at the fee. A superb first half twist and turn and the Hammers go in 1-0 up.

The second half onsalught never really got going for City and Sun Jihai made it mission impossible with his swat at Matthew Etherington , Queue Ashton again with a suspiciously off side looking goal. and despite a late Musampa goal the FA Cup dream dies for another year.

Ah well , at least were safe ! So two defeats and can't complain about decisions or bad luck or even playing a superior side as both all 3 teams are quite evenly matched.The team simply didn't perform on each occasion.