I had a couple of days in Nottingham this week so whilst there decided to catch the FA Youth Cup fifth round game between Forest and City.

I've heard various reports of some of the Academy players we have at the moment but it was my first time of seeing them actually play, and in particular I was looking forward to seeing Daniel Sturridge play after hearing the hype surrounding him.

Although the final score was 3-0 to City, it was two goals towards the end of the game that sealed the win, but it was a game that should have been killed off in the first twenty minutes when City dominated and the game was played almost entirely in Forest's half.

City took the lead early in the game through Kelvin Etuhu, who used his size and pace to outmuscle the Forest defence before coolly slotting home. He nearly added a second shortly after when a clever shot from the edge of the box crashed against the crossbar. 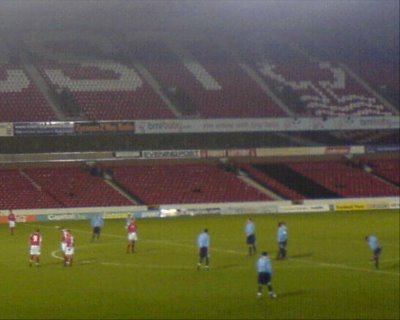 Daniel Sturridge then spurned a couple of good chances before Forest began to get back into the game largely through the impressive Felix Bastians but still rarely troubled Matthewson in the City goal. There were one or two anxious moments in the second half and a sharper attack than Forest's may have capitalised. The game was all but over though with ten minutes left when diminutive winger Karl Moore - who had a superb second half, capped a mazy run from inside his own half by finishing well. Substitute Ched Evans made it three shortly after to earn the win and a home tie against United in the quarter finals.

City were clearly the better side and there were some impressive performances. Micah Richards in defence looked comfortable and Michael Johnson looked dominant in midfield and eager to join the attack. Shaleum Logan looked sprightly at full back and as I mentioned earlier, Karl Moore had a superb second half.

A slight disappointment for me was the performance of Daniel Sturridge. He link up play was impressive but was wasteful of several good chances he had and to me was overshadowed by the more assured Kelvin Etuhu. Harsh to base it on one performance I know (and he is only sixteen), but he looks some way off being even near ready for first team contention.