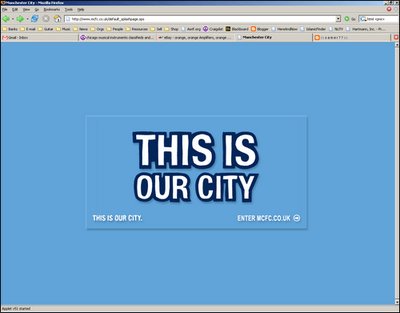 The cynic in me immediately picked up on the fact that no player was featured , previous seasons have included SWP , Anelka and Goater from memory. All have gone on to be sold ! So the club has obviously learnt from the Robbie Fowler 'feature' in the match programme the week he was sold and the negative publicity it produced.

It now features your surname emblazoned across the shirt with the renewal date below. An interesting change of tact along with Stu's comments that 'we' are what drives the team and further references to the 'this is our city' campaign. So the fans are now the superstars , mainly because they sold all the heroes ? Fingers crossed for Samaras.

On a slightly paranoid note the only person to be featured is Pearce , who from the comments I have read in the papers has certainly thrown his hat in the ring for the England job , the press are certainly getting behind him and a lot of ex-pro's as well , lets hope this band wagon de-rails pretty soon.

When did I become so cynical ? ?

Following on from the weekend , did anybody else notice the 2 complete empty rows in the south stand ? Anybody got any information ? Has the club banned or moved fans with the ongoing stand-up sit down farce. Click on my profile above and email me if you have any info on this.