File this one under 'unsuprising away defeat'. If there is any room that is.

Was anyone really suprised that we came away from Anfield with no points and no goals? After all, it was a performance that smacked of no ambition and very short on ideas. It is becoming increasingly apparant that there is a problem in how we are approaching away games. Watching the game yesterday, you could see that the best outcome from the game was likely to be a 0-0 draw.

That is fine and dandy to play for 0-0 draw, especially at Anfield against Liverpool where traditionally we don't fare very well at all, but it is puzzling that when we do go a goal down we are then incapable of altering the tactical approach to get back in the game with only like for like substitutions made by Pearce. 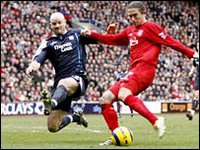 It was one of the poorest first half performances I have seen for some time yesterday and Danny Mills may be pleading he needs 'more games' to get his fitness back but even Alan Smith in his current state would have been able to get closer to Harry Kewell than Mills did - he must have been thirty yards plus from Kewell when the ball got played through to him and there was really only one outcome he got hold of the ball.

After announcing how desperate he was to make the England squad for the World Cup, Joey Barton - despite being left out of the squad for the Uruguay, at least had a chance to impress the watching Sven Goran Eriksson. However he only succeeded in huffing and puffing and picking up a yellow card for a foul on Agger which was far worse than first looked (more to come....).

We managed to put a decent ten minutes together in the second half after the introduction of BWP who looked far livelier than the bearded Sibierski (who uncannily resembled one of the characters from Guess Who?) and Samaras was presented with a golden opportunity to level things up. Doing everything right in the build up, he then threw the good work away by inexplicably failing to at least hit the target. You sensed then that that was the one clear opportunity we would get and so it proved as Liverpool took the points with yet another 1-0 victory.

Back to Joey Barton again. After his first yellow card, the odds of him receiving a second would have been very short indeed and it was no suprise when his over-exuberance/stupidity/irresponsibility resulted in a near carbon copy of his first booking to earn himself a red card, which strangely sees him only banned for one game (Sunderland) rather than two if he'd only picked up the one yellow card. Surely only a matter of time though...


Amazingly, and despite some awful away form over the past couple of months we are still within striking distance of a top six/seven finish. What is crucial though is the fragile away confidence doesn't begin to creep into our home form as this is what is keeping us afloat at the moment.

Interestingly though, our last league games have seen the following scorelines:

Next up - Sunderland at home. What odds City scoring 3?