I Predict A Riot.

Share All sharing options for: I Predict A Riot. 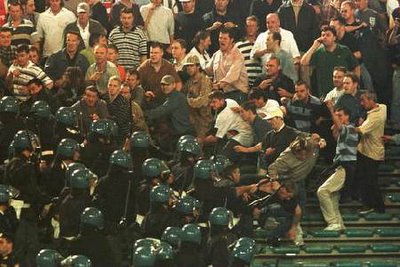 Thanks to those that emailed regarding the two empty rows in the south stand for the game V Charlton , while I have been aware of the problems for a while , a deeper look into the situation reveals a potentially explosive situation in more ways than one.

Just a quick scan of various message boards and city websites shows a varied but always passionate take on these events and provides the club with a diffusion act on a hand grenade with the pin already pulled of a situation.

So what's it all about alfie ? Its starts with Lord Chief Justice Taylors report in to the Hillsborough Tragedy which decreed all football stadia to be all seater. Local councils issue safety certificates under interpretations of the report. The local council now happens to be our landlords ! Which would appear to be a major factor in the current situation.
At Maine Road as many stood as do now but there appeared to be no problem , in fact the only mention of problems came from the Buccs over in Stretford with the council regularly threatening to close parts of the swamp (but never actually doing so?)

And so to Sundays events , two full rows closed with the normal residents apparently sent a letter and dispatched to all sides of the ground with scant regard shown for people who normally sit together and more importantly an almost 'punish the class' attitude shown by the club as they moved people may not have broken any rules , ever. Rumours from stewards that more rows would be closed until the problem is resolved have not been confirmed.

From the fans perspective ; more annoyance that its the 117 block that is been routinely monitored and indeed cracked down upon when away fans are left alone seems to be the main objection. The other that the 'rules' are killing football and that they would rather be banned than sit down and become one of the 'happy clap' brigade.

And so to the conundrum that now faces the club : how to keep the council and the fans happy.
As much as I would like to see along with many others a return to standing , and given the magnificent access in our stadium it would not be a huge problem to put a second set of turnstiles in the concourse to enter an enclosed section for season ticket holders only which was monitored by CCTV ( too easy ?) its never going to happen. The police , FA and even the clubs don't want it. As we all give our hard earned cash to only industry that only expects loyalty from its customers should we expect anymore ?

Well yes ! in this situation its upto the club to open meaningful dialogue with not only the fans affected but all the fans to get there opinion on this. If the club sat and listened went away and tried to get the views of the fans implemented or at least heard im sure most fans would feel a lot happier and maybe even more compliant with the situation if the the consequences were spelt out to them , however , I doubt it. The club appears to be cut off from the fans, paying only lip service to likes of point of blue the solution may well end up been trouble on the terraces once again if sundays incident goes up just one notch and sub 40k crowds next season.


Any comments on this welcome.