We continued our consistent run of inconsistent results (win, loss, win, loss, win....) with victory over Charlton on a wet afternoon yesterday in a battle of the potential England managerial candidates.

In truth, I thought we were well worth the three points and Charlton's second goal gave the match a closer feel than was really the case as I thought we were the more inventful and incisive side going forward, but, if it wasn't for a smart David James save late on they could taken a share of the points.

We had an unaccustomed pairing at full back, with David Sommeil featuring on the left hand side with Micah Richards making his full debut on the right. It was Richards who particularly impressed, looking assured and comfortable on the ball and in the tackle and willing to bring the ball out of defence. 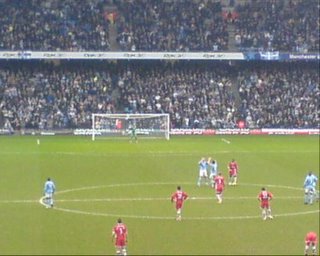 I thought Pearce made the right decision in restoring Andrew Cole to the starting line-up as his familiarity with Darius Vassell ensures the attack has more potency to it. When he was brought on at half time though I thought Samaras looked bright in parts, clearly giving us an aerial threat and took his debut goal well. However, he then contrived to leave the whole stadium in amazement with an 'attempt' on target that I'm still having difficulty realising quite how the ball ended up where it did.

All three of our goals were well taken - Dunne striking well for the opener, Samaras showing his worth in the air for the second and Barton with a superb long range strike (not heading the cry of 'Don't be so ridiculous' which came from the South Stand) for the third goal which all but sealed the win. 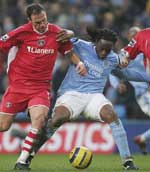 A couple of injury worries with Trevor Sinclair going off with a suspected fractured cheekbone which is disappointing given his excellent form since he had a sustained run in the side this season - Vassell was clearly no replacement on the right hand side and I would have prefered Croft or Ireland to have replaced Sinclair. Andrew Cole also limped off and reports suggest he is doubtful for the trip to Villa next Sunday.