Share All sharing options for: Barton in contract u-turn.

In what must be one of the quickest about turns in football history, it appears that Joey Barton is set to pledge his future to the club by signing a new deal, less than a week after rejecting a 'take it or leave it' offer and handing in a transfer request, citing that he had no future at City.

Yesterday, I wrote that:

"...if it is solely down to money and he (impetiously) handed the transfer request in as he was 'backed into a corner' then I believe that he and the club will compromise on the contract offered and he will re-sign."

However, I could not foresee a situation where the could be a possible resolution so quickly, but several newspapers and websites today reported that Barton is even hopeful of concluding negotiations with the club before this weekends game against Charlton and have carried comments from Barton in which he appears to be very contrite and regretful over his actions of a week ago.

"Hopefully, in an ideal world I will sign a contract this week and we'll get back to normal.
I'm prepared to negotiate and so are the club and, hopefully, the fans are prepared to forgive and forget. That's the only way we can go forward" stated Barton, before agreeing:

"In hindsight I was a little bit impetuous in handing in a transfer request. But the club have rejected it and it is not my aim to leave in the near future. I want to be a part of things here and there is no reason why it cannot be decided this week." 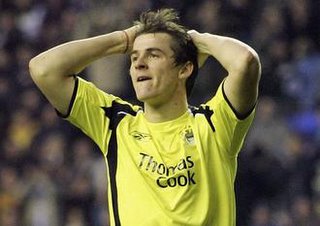 Undoubtedly his initial transfer request was impetious and out of the blue, the timing of the request certainly puzzling and ill-timed, but equally events today were as, if not more of a suprise given some of the comments issued by Barton and directed the club. Subsequently, the club have not in any way played hardball with Barton, if anything Stuart Pearce showed a great amount of class in how he handled the situation, stating that he was disappointed with his actions, but failing to stoop to issuing the kind of threats that Barton and his agent levelled against the club in the press.

So why the change of heart? Barton could have hardly been shocked with the reaction from the supporters as he committed a cardinal sin with a display of disloyalty to the club that so many hold dear. The reaction of the crowd could have been far worse, as some sections have supported Barton in both the Newcqastle and Everton games - something that was not deserved.

Was it that he believed that one of the 'big' sides would likely make a bid for him and he would be heading off to Highbury or Anfield? Possibly, but I don't think a move like that was ever likely, certainly not for a couple of seasons of more consistent and dominating play and long term proof that he has left some of the off-field problems behind for good.

Most likely I think the transfer request was a move borne out of frustration at not getting the deal he (and/or his agent) believed he was worth. It was a foolish, ill-judged and ill-timed move that I am certain he regrets. I don't however believe it will affect him too much in the future though. The rest of the squad appear to have stuck by him at the very least judging by their reaction to the opening goal against Newcastle and the fans will forgive in time as I don't believe anyone really wanted to see Barton walk out of the door.

Barton has already begun a charm offensive by giving an interview in which he states how he has begun to improve his life off the pitch. It may take a while, but I think the way Barton will be forgiven will be to simply prove his commitment and desire to the club - and it will be his actions on the pitch rather than any words that will see him achieve it.