Appearance in The Observer.

Share All sharing options for: Appearance in The Observer. 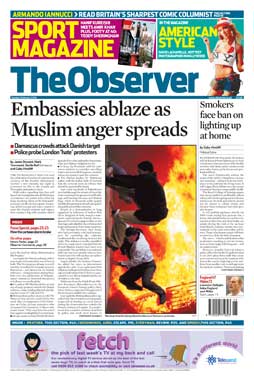 Bitter and Blue was the featured in The Observer this weekend in 'The Verdict' section for our take on yesterdays defeat at Everton.
Unfortunately, there is no direct link to the piece on their online publication, but it appeared as follows:

We were all over Newcastle on Wednesday, attacking and
incisive, and today we had just two or three attempts on goal. It's getting very
frustrating away. I'm not sure it's a matter of tactics but we are getting
outfought at sides like Everton and Bolton. The last half an hour you're more or
less resigned to defeat. We needed to sign a midfielder in the transfer window.
Fans are divided over Joey Barton - there were banners and boos, but he came
over at the end today. It will rumble on, but he can't leave until the summer
and will forgiven if he signs a new deal.