Things could get ugly...

Share All sharing options for: Things could get ugly... 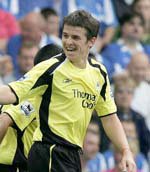 The twenty-four hours since news broke that Joey Barton had handed in a written transfer request do not appear to have brought the two sides any closer to resolving the issue.

Firstly, Barton's agent Willie McKay spoke this morning and indicated that the decision was not down to money (or at least was no longer about it) but hinted at a lack of ambition from the club, and appearing to close the door on any reconciliation, saying:

"It's not just about money but where the club wants to go and where Joey wants to go.
Joey had a conversation with Stuart Pearce and he said he was disappointed with the offer of his contract. Speaking to Joey (on Monday), if Manchester City came up with much more than we asked at first I don't think he will sign it. That's just the way he is now".

Several newspapers this morning were openly critical of Barton's decision, especially in the wake of the way the club had stood by him over his off-field incidents and reported that the club claimed the improved contract offer would make him the second highest paid player at the club, contrary to McKay suggesting that clubs take players who came through the ranks 'for granted' when it came to contract offers.

In the last couple of hours it has emerged that City rejected a verbal offer made by Middlesbrough, and more speculative reports linked Barton with both United and Arsenal with Stuart Pearce determined to keep Barton at the club, commenting:

"The bottom line is the decision stops with me. If I say Joey is not going anywhere, he doesn't go anywhere, whether there is a third party involved or not.
It is not as if a deal can be done and without us knowing about it."

So, as the transfer window begins to close, it appears that although Barton will not be moving anywhere, there appears little common ground for the clubs to work on between now and the summer when the club will be under pressure to sell Barton before he enters the last year of his contract and his value diminishes.

Events over the last twenty-four hours do not appear to have swayed Pearce over whether to include Barton in the line-up for tomorrows game at home to Newcastle, but it will surely be a massive distraction if Barton plays, given the level of feeling this has generated already, and Pearce would be well advise to tell Barton to steer clear for this game at the very least.