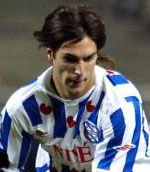 After losing his arbitration hearing earlier this week, Heerenveen striker Giorgios Samaras is reported as having failed to turn up for training today and will not feature this weekend against RBC Roosendaal.

His arbitration hearing was an attempt to prove that Heerenveen were demanding an unreasonable fee for him and that he could earn substantially more in England than in Holland. Having the hearing rejected, the possibility of him leaving Heerenveen lies in the clubs hands, basically if a club matches their valuation of him.

So far, City are the only club to have tabled a firm bid but appear to be some way short of their valuation. History shows though that it is rare that an unhappy player remains at a club for too long and it maybe that Heerenveen now draw out this saga for as long as possible to squeeze the largest possible transfer fee for him.

With the Fowler move earlier today, it remains to be seen whether City will now up their offer or try or bide their time until the summer - with the risk of other clubs bidding for him.