Not exactly a humdinger to signal the end of 2005, but a game that left neither manager enamoured with it as a spectacle at least ensured both sides stopped a recent run of defeats.
Perhaps it was hoping for slightly too much to come away with a win from Middlesbrough given our poor history of results up there, and our winless streak in the Premier League against them now stretches to thirteen games.
The GMR commentary of the game suggested that it was a game without too many chances, and the brief highlights on MOTD seemed to back this up, with Schwarzer making a superb save from a Barton header (reminiscent of a mid-1980's Andy Gray attempt) a Boro claim for a penalty when Viduka appeared to be caught by Distin as he winding up for a shot - although it was anything but 'stonewall' despite Steve McLaren's protestations. 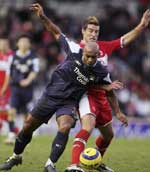 McLaren is beginning to come across in a similar vein to David O'Leary, in that he always appears and sounds like he has been really hard done to by everyone and everything. He has in truth spent a fair amount on players brought in to the club and been blessed with a talented crop of young players coming through yet still seems unable to take Middlesbrough to the next level (a fate which ultimatelty did for Bryan Robson). Yet he still seems to enjoy this reputation as a 'bright young thing' in English football and cosy-ing up to Sven is doing no harm for future England managerial ambitions despite his reputation as a talented coach not seeming to bring anything of benefit to the national squad .
Much like several players who command high transfer fees on leaving have done, it seems a reputation gained at Old Trafford can take you a long way.
Stuart Pearce again praised the battling qualities of the side but it seems that only the introduction of Stephen Ireland managed to spark some life (Fred Ayre in particular emphasising this point and the lack of creativity offered by Sun Jihai) and he may get an outing against Spurs on Wednesday as we look to take what will be a welcome three points.