Despite no official announcement as yet, it appears that we are extremely close to confirming the signing of Georgis Samaras, the Greek striker currently at Dutch side Heerenveen. The M.E.N. Sport front page suggested it was a done deal and both Heerenveen and the the players father stated a deal was virtually agreed, for a fee believed to be £4.8 million.
Arsenal had also rumoured to be interested in Samaras before they signed Emmanuele Adebayor (also linked with City) earlier this week. 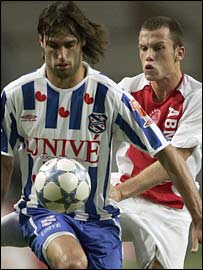 Although the club remain silent it does seem as if Samaras is headed to City and Pearce's tactic of keeping deals quiet seems to have paid off as Samaras does come with a good reputation and made his intentions to quit the Dutch side by the summer very clear.

Still, the fee is sizeable for a player who is still largely unproven (he has a record of seven goals in fifteen starts this season). It is also the first meaningful fee Pearce has sanctioned and of course the first chunk of the SWP 'exaggerated transfer fee' that we received, which, as I have written before will be the ultimate judge of whether the transfer was a mistake or not. A striker is one of the areas we do need strengthening and it may also now allow Bradley Wright-Phillips to go out on loan to a Championship side to get some meaningful action behind him rather than the ten minute cameos he is currently restricted to.