A boxing day cracker for Wigan, but a defensive catasrophe for City and Sylvain Distin in particular as the pace and power of Roberts and Camara put the back line to the sword at the JJB.
It all looked so good early on as Sibierski - who kept his place ahead of Cole, took advantage of some lax positional play from Chimbonda to head home within three minutes. After that however, it all went pear shaped as the previous infallible Distin miscontrolled to allow Roberts to break free on equalise. Not long after, Sommeil was equally as guilty as Chimbonda was for our opener as he remained statue-like and allowed McCullouch to put Wigan ahead for good.
Barton was unlucky not to draw City level when (after a little luck) chipped the keeper to cap a surging run only to see his effort come back off the post.
The game as a contest was all but killed off when Distin and Thatcher challenged each other for a header which only resulted in Roberts being presented with an opportunity. Distin attempted to track back but was swatted away by Roberts on route to making it 3-1. 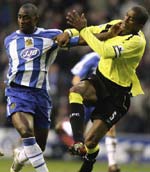 Richard Dunne was introduced in the second half, although suprisingly Distin was not put out of his afternoons misery as Sommeil was withdrawn. Dunne was not spared misery however as Camara booked a slot on Soccer AM by nutmegging him before smashing home.
Still, City made a fist of it in the last quarter of an hour as Barton showed superb technique to hit home from the edge of the box, capping what was a superb and all-action performance from him and substitue Cole hit home a rebound from a Sinclair shot. Amazingly, Sibierski could have snatched a point in injury time but reverted to type following his headed goal against Birmingham and put his effort wide.
In truth, it was a horrendous defensive display and no amount of preparation (or lack of) can account for the individual errors which ultimately gave us no chance of taking anything from the game despite managing three goals away from home.
Give Wigan some credit though. They appear to be well-drilled and aware of the strengths they have - namely the pace and strength in attack of Roberts and Camara.
What was suprising though was how much Distin in particular struggled. Wigans goals came from direct balls played forward and these are usually meat and drink to Distin, who was handled players with pace comfortably before but was outfought in particular by Roberts.
Looking at the next couple of fixtures - Chelsea and Middlesbrough, both teams have powerful, pacy strikers (Drogba and Yakubu) so it will be interesting to see if they decide to 'target' him in the wake of the Wigan game.