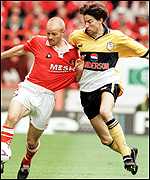 Many thanks to inspector sands from the excellent all quiet in the east stand for his comments on sundays fixture.

If you get a chance please check out the articles relating to uniteds visit,
this guy could write for bitterandblue anytime , maybe as inspector gadget ?

Anyway sky have picked another cracker as we city & charlton have a combined
total of one point from the last six games !

Talk us through Charltons start the season .........
Well, it all started out alright - good wins over Sunderland and Wigan
trouncing Middlesbrough and beating Birmingham were all good.
Darren Bent was a revelation, Alexei Smertin unlocked the key to
Danny Murphy's talents,And suddenly we were reinvented. We even
avoided getting knocked out of the League Cup to Hartlepool.

But the wobbles started when we were 2-0 up against Spurs two
months ago,only to lose 3-2. But that was at least a proper contest
- the 1-1 draw against crappy Fulham was more disappointing - and
we bounced back to beat Portsmouth and (gulp) Chelsea in the League
Cup. How long ago those days seem now. Bolton ,Blackburn and
Manchester United have feasted on our bones since then.

Somehow the Murphy-Smertin engine in midfield has started to
splutter , defences have sussed Darren Bent out, and even the
solid Luke Young has had some iffy games. A spineless 1-0 defeat
at Aston Villa on Saturday looked like being avenged when we were
2-0 up against Blackburn on Wednesday in the League Cup...except
we lost our bottle and went down 3-2.

So now we're back to the same old grumbles we had last season.
We have a bigger squad, but so many of that bigger squad are
frankly useless, so if the likes of Murphy, Smertin or Rommedahl
underperform, there's no quality waiting in the wings to take
their place. It could be a long old winter down at The Valley.

Darren Bent , a lot of talk that we should have made an offer
for him, hows he done ?
He's been vital to us - without his goals, we wouldn't have had such a
good start to the season. But it doesn't take much to shine in what's
got to be the Premiership's worst strike force, and people have sussed
him out pretty quickly. His challenge is to keep his confidence up -
if he can keep his head during the bad times, a jammy goal here or
there could make a world of difference.

Who's been your best player this season ?
Hard to single one out. Bent until the goals dried up and Murphy's
been sublime, while Alexei Smertin's been of a different class.
We haven't seen as much of Darren Ambrose as I would have liked to,
but he's also been impressive.
But nobody's been consistent this season, which is a bit worrying to
say the least.

And Finally a prediction ! ! ! !I'm going to stick my
neck out here – 2-2, a result to keep the TV executives purring, but something that'll satisfy neither of us.