Looking at my preview on Saturday morning, I commented 'games have featured goals in the past, and Charlton's leaky defence of late will be a welcome sight considering our recent struggles in putting the ball in the net and iffy form away from home'.
Before I get too far into self-congratulatory mood, I must note that I did predict a 1-1 draw so the crystal ball may not have been fully reliable prior to the game.
But anyway, a 5-2 away win and as good an attacking performance we have seen for some time to blow away the frustrations of recent games. Stuart Pearce caused a slight suprise in omitting Lee Croft and Stephen Ireland, the man in the mask David Sommeil replacing the injured Mills and a new 'wing-combination' of Trevor Sinclair and Sun-Jihai paraded.
Pearce signled out the return of Reyna, Sinclair and Sommeil for particular praise. 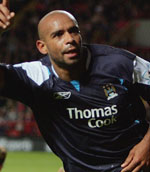 For me Sinclair, in particular looked lively and sharp throughout the game and he linked superbly on the right-hand side with the clinical Cole and Vassell in attack, whilst Joey Barton was in superb form attacking from midfield and we constantly carved open the Charlton defence with the midfield in complete domination, completely overshadowing the trio of Holland, Murphy and Smertin.
Distin was again in superb form and is now showing a greater confidence and awareness in his role as captain of the side.
The only disappointing facet was the two errors that led to Charltons goals - despite a good strike from Bothroyd James should have got a better hand to it and Dunne's indecisiveness led to the Addicks opener.
Still, the defence has generally been superb for us all season, and the confidence the side will take from this performance (let alone the result itself) should not be underestimated. Hopefully we can now take this forward into the next two home games where we are likely to face more stout and resolute opponents than Charlton were.

Match reports:
Sky sports
The Times
All Quiet in the East Stand