The future of Robbie Fowler has again come under scrutiny after he was left out of tonights reserve fixture against Bolton, with the club offering no explanation for his omission after it was initially reported that he would be playing.
Fowler has featured in recent reserve games in a bid to regain fitness and challenge Cole, Vassell and Wright-Phillips for a first team berth. Fowlers advisor George Scott was initially quoted as saying 'there are no problems'. However, teamtalk.com report him as saying "Robbie has been fighting his way back to fitness after a back injury and I don't think City would bother to play him in the reserves at this stage." 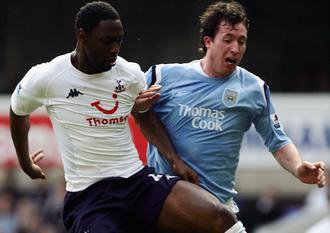 To me, if he was 'fighting his way' back to fitness it is exactly the kind of game both he and the club would looking at him playing in, particularly if Fowler was being lined for a first team spot, with Cole and Vassell cooling off from their impressive start and Bradley Wright-Phillips still largely untested.
As I've mentioned before, I expected Fowler to be on fire this season with the way he ended last season and (finally) seemed to be igniting his City career. One thing is for sure is that he won't be loaned out to a Championship side as has been mooted at various times.
With his contract up in the summer and a further £500,000 payment to Leeds due in just two games time I honestly feel that his City career (and possibly in football) is all but over as there is no chance of a new contract being offered to him when his current deal expires in the summer.
It is sad to say as I've been one of his strongest supporters but for the best interests of all parties, it has surely come to the stage that when Pearce adds reinforcements in at the January window, that the club is considering an arrangement to terminate Fowler's contract, with the all sides cutting their losses on what has been a disastrous move for all concerned.