Crisis? What crisis?
City now head into the forthcoming international break on the back of a morale-boosting, if still not-quite-right 2-0 victory over Everton, condemning the Merseysiders to another defeat without a goal and leaving them at the foot of the Premiership.
In truth, both sides struggled to create many opportunities, and when chances arose they were generally frittered away by wasteful play.
The first half passed without much incident, ranking as one of the most inept forty-five minutes in recent memory as both sides offered little and created even less, failing to wake the half-asleep crowd from it's slumber. City had the best of the first half opportunites, but Vassell's final touch was again eluding him and Sibierski was wasteful on a couple of occasions.
The second half saw City begin to dominate possession and saw a little of the early season confidence return with Cole and Vassel combining well. It was the introduction of Lee Croft for the sluggish Musampa that added and extra spark to our play and it was Crofts tenacious play which freed up Danny Mills on the right for a marauding run. Mills, deciding against heading David White style to the byline and cut inside before unleashing a viscous shot past Nigel Martyn from thirty yards to stun both the home and travelling support alike. 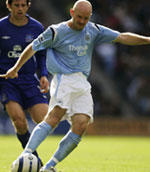 Now a goal down, Everton had to alter the game plan to try and get back in the game and this served to prove why they have struggled this season, as their attacking options were more desperate and helpful thananything else. Big Dunc was by now on the pitch, but the game passed both him and the clearly unfit James Beattie by with only Kilbane's shot - saved well by James, offering a threat to the City goal.
The last couple of minutes saw City stretching the away defence and in stoppage time, a perfectly weighted through ball from Joey Barton saw Vassell outmuscle Ferrari to poke the ball past Nigel Martyn to seal the win.
So, three points and back up to sixth in the table (and only a point off second). Concerns for me were the off-key performances from both Sibierski and Musampa - one of whom will seemingly be guaranteed a place on the left due to lack of alternatives, but plus points were (again) the partnership between Dunne and Distin (is imperious too strong a word?), the command and assurance in midfield of Barton and the creativity and energy of young Stephen Ireland.
All in all, it could quite easily have been one of the dourest 0-0 draws in my lifetime, but on the basis of the last half an hour at least, a victory and three points that were fully deserved.