All eyes on Vassell.

Share All sharing options for: All eyes on Vassell.

Monday nights game sees Darius Vassell line-up against his old side Villa for the first time since moving to City in the summer for a fee of £1.5 million. Stuart Pearce has backed him to perform well on Monday, citing how he enjoyed facing his old clubs, whilst David O'Leary has also been talking about the transfer.
Vassell himself also talked about the move and how strange it is to face the club he was at since the age of ten, but admitted it has been the right move at the right time of his career.
Although his City career is less than ten games old, he has fitted in well so far - particularly alongside Andrew Cole, and has shown the form that earnt him a place in Euro 2004 and the last World Cup. 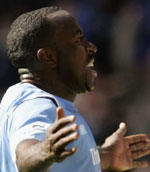 Another bonus has been the fact that at a time when the club is struggling with injuries up front, he has been an ever present following a couple of seasons of injuries.
I know he did receive some stick from Villa fans at the time of the move, but it is one that has probably worked well for all parties, and perhaps O'Leary summed up the situation best of all:
"I think Darius needed a change, the boy knew that himself and it was good business for Villa as well. I think it has worked out well for both of us.
We haven't sold City a bad player, he's a good player but a good player who needed to go somewhere else.''


More From Bitter and Blue